Some kind soul from a major Russian company heard my pleas!

I've been teaching myself the Russian language (as no one in my family speaks it anymore), and I came up against a major hitch - it's really easy in Windows to switch between the English Keyboard Set (which uses the Latin alphabet) and the Russian keyboard set (which uses the Cyrillic alphabet), but it's really hard to remember what key on your keyboard will type what letter in the other language.

The reason for this is that most keyboards in the western world have Latin letters on them only. After all, most people use keyboards to type in their native language only, and not other ones. 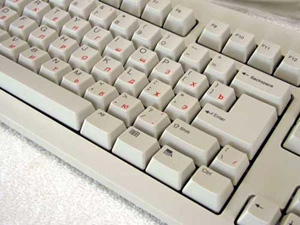 In Last 2005, I found out that some companies make special labels that help solve this problem. You can get them for many different languages, and they're clear plastic labels with letters on them - that fit onto your existing keyboard. This means that each key on your keyboard not only has the original letter on it, but the letter in another language on it too! You can see what I mean in the picture to the left of this.

I was immediately intrigued by this idea, and did some research on this. However, because I live in Australia, and most the manufacturers are in North America, it turned out to be a rather expensive option for me. So I put this on the back burner.

Then I put a message on my Support Us page, bemoaning that I couldn't get these labels in Australia, and pleading for someone feeling kind and generous enough to purchase them for me, or donate money to me so I could purchase them. 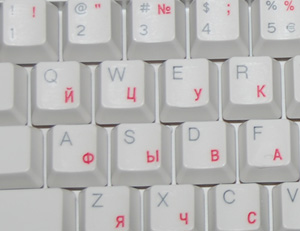 I eventually forgot all about it.

I received the shock of my life when, on 31 December 2005, I received an email from Web Ideas International. They told me that they would be happy to send me a set for free if I put links to their three web sites on my web site.

So, naturally, I fell of my chair in shock. I quickly sent an email off, and then a couple of weeks later they arrived! They're pictured above. Anyway, Here are the links they requested that I put up.

Their Company Site and Store is located at http://www.RussianKeyboards.com.

Their Keyboards site is http://www.RussianKeyboards.com. On here, they sell sell new keyboards that have both Latin and Cyrillic letters on them already - what a marvellous idea!

Their Keyboard Labels site is http://www.RussianStickers.com. On here, they sell the labels that go on existing keyboards.

When the time comes to purchase more, I know where I will be getting them from!